The Okxik (from Cursed Speech Ökksyk), also known as the Drædon or Devourer, is a bipedal orbicular predator native to eastern Dwaia and presumably the Plane of Earth. Several subspecies of Okxi exist, generally growing larger and hairier as they trend northwest from their origins in The Deep Bogh. Based on the Devourer's evil energies, naturally destructive nature, and predator status, most zoologists consider it an invasive species of the First Plane.

Okxi are feared for their massive maws and asphyxiating toxins left wherever they tread. Their strong spring-like legs allow them to run up to 45 miles per hour and jump quite far for their weight. As aggressive pack hunters, a herd of northeastern Devourers are nearly indomitable for most adventurers.

Due to the sheer loudness of their home environment, most Okxi are deaf, and curiously incapable of smelling as well. They are quite heavily dependent on their eyesight as a result.

The exact origin of the Okxik is unknown. However, it is believed that the species is one of numerous who have migrated from the Plane of Earth and found a fitting home in the crusty deserts of the eastern First Plane. This theory is supported by their highly specialized adaptations to other creatures in Bogoland, suggesting that they have all had contact with each other for a very long time.

Okxi will mark their territory with piss and shid and bones from kills, and are also observed to build skin tapestries harbouring dreadful messages, probably intended to scare away more intelligent creatures.

Their nests are usually crater-shaped in appearance and are protected with an assortment of layers of prey's skin, bones and rocks, and shid walls. When these nests are threatened the female Okxi will scream out in a horrible fucking noise known as "Hysterical Ass-ripping." Okxi that are particularly DUMMY THICC can, as a defense mechanism, use their rippling rears to generate a shockwave to knock down incoming attackers.

At first Okxi were believed to be incapable of forming coherent sentences. However, upon consumption of a kill, the Okxik has been discovered to stand before anyone who may be observing and proclaim that they "had to do it to 'em". The implications of this has researchers terrified.

Upon generation, every living being within sight must pass a DC14 WIS or CHA saving throw or become paralyzed with fear for one turn.

The Okxik makes a STR check to spring forward 2d20 meters and not break its legs like a retard.

Also referred to as the Arid Okxik or the Bogxik, these predators inhabit the Deep Bogh and generally hunt alone. They are smaller and lighter than the other breed, but even more aggressive. Bogxi are far less social than other Okxi, and the most likely to compete within their own species. This is likely due to the increased interspecial competition and general scarcity of resources in the region. Or maybe they're just assholes idk.

Due to the sheer loudness of their home environment, Okxi are deaf, and curiously incapable of smelling as well. They are quite heavily dependent on their eyesight as a result. 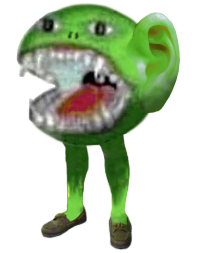 A picture of a northeastern drædon

Drædons inhabit the forests directly north of The Deep Bogh, where colder weather necessitates a thiccer hide. This breed grows larger than its native counterpart, often attributed to a lack of competition and therefore an abundance of nutrients. They developed a far more socialized pack-hunting strategy, and tend to concentrate in bigger herds with males and females cooperating to hunt prey - females often finish kills.

Unlike their native counterpart also, the Drædon has developed a primitive sense of hearing. This hearing has enabled equally primitive speech to occur between these Okxi.

Upon an Okxik's death under the presence of certain magicks, the Bone contained within the confines of its meat may be imbued with deathly sentience and forced to live again. This unboply abomination is known as a Spookxik. They are much lighter and gain the Persuasion skill, making them even more dangerous than their never-dead brethren.

Here is a list of various other Okxi species that are unidentified or single incidents.

Its toes secrete a highly poisonous juice. In fact, this is where the word "toxic" comes from ("toe" + "okxik").

The weight of a Devourer poses a significant threat when they jump great distances. To help mitigate this stress, an Okxik will land on collapsible legs and roll to delay its impact over a longer distance. This is at least one explanation why their legs can fold so tightly into their body and the rough sphericity of the cephalothorax.

According to the SC🅱, any confirmed sightings of an Okxik near a settlement necessitates immediate evacuation, citing biohazardous and potentially cognitohazardous properties. See also: SC🅱-35