Difference between revisions of "Toe"

The toe is a species of digitidae that is highly valued for their luscious toenail flesh. They are worm-like creatures that kind of wriggle around, with a surprising amount of agility for a creature with only two bones and one muscle. Their toenail, mounted on top of their head, forms a protective carapace for their brain, as well as a sharp blade for offensive capabilities. In general, they kind of look like a toe.

Upon finding a suitable partner, the male toe will challenge any other toes going for the same partner. This usually results in several toe duels until only one male is left. In these toe duels, two toes face off to see who can open their toenail hatch the widest. This leaves the toe brain vulnerable, but the point is to open up far enough that they can consume the other toe in a process known as toenail subduction. Once the widest toe jaw is determined, the loser will give up and offer themselves to be consumed into the winners brain. This merges their consciousnesses into one, and also provides nutrients to the winner. The merging of consciousnesses also has the result of increasing intelligence. Thus two average toes with IQs of around 1.7 will combine into a new toe with an IQ of 3.4. One notable case of this is when one toe, now called Woke Toe, managed to consume several hundred other toes, thus raising his IQ to 500, after which he became part of the BOI.

After a victor is established, he will court the female toe and they will proceed to mate using their toe-acas.[Don't make an article on this.]

Nails of the toe

Toenails have a wide variety of uses. Some products made from them include:

As a result, they are much sought after, which has almost lead to toe extinction in the past. This was stopped when Woke Toe used his skills at international politics to create a movement advocating for toe rights. Following this movement, toe farmer scientists have shifted toward artificial toenail generation techniques. This has had the side effect of producing many new toenail based materials, such as armpit hair made out of toenails, and toenail leaf, a finely flattened toenail film which can be gilded onto metals to make them stronger, or layered onto food for a fashionable appeal.

Toe Milk is a fluid produced by glands within, you guessed it, the toe. These glands are located at the back of the toe and the fluid that they produce seeps out from between the toenails. Both male and female toes lactate this fluid and they use it as either a nutritional drink for their young, a deterrent to predators by congealing it around their nails or in the case for males exclusively, as an ejaculate that also congeals.

Toes as a physical storage medium

When you open a toe by lifting its nail, you gain access to its brainal cavity, a place where you can store lots of stuff. The storage space is mainly derived from toes being so stupid that anything that enters their brain has to first be compressed to a much smaller size. So for example, if you stuffed a magical staff into a toe's brain, it would temporarily store it as a matchstick. Extracting the item back out and decompressing it into its original form is a bit trickier, but my uncle say he can do it pretty consistently. If I remember correctly, he said something about "jiggling" the "nibblet" and that it's kind of like milking a cow, but I have no idea what he was talking about.

Many adventurers take a toe slave (Woke Toe prefers the term "apprentice") with them so they don't have to carry things. The main problem is that toes are very dumb and forgetful so you're likely to lose most of your stuff after a few seconds. Woke Toe recommends increasing your toe's intelligence in the natural process of toenail subduction, but most people just dope up their toe with Ritalin and Viagra.

Another problem is that you risk your stuff getting stolen by a toe goblin. Not only do you lose your stuff, but the experience can also leave both your toe and you with a long lasting case of PTSD, as toe goblins have extremely unclear motives, and also no sense at all for personal space. 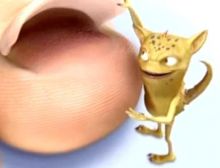 This toe golbin is way too happy to find an empty toe. What is he planning?

Having a toe as a pet is a lot of work. Since toes are so dumb, they tend to quickly die without proper care (as they do in the wild). One example is that you need to remove brainal gunk from the toe's brainal cavity using a toe pick, as this normally builds up until the brain stops working.